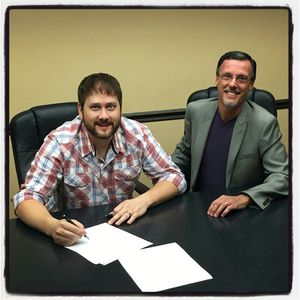 Studio Gold Music, Inc., has announced the signing of popular Georgia Recording Artist/Songwriter Scott Brantley to a new Worldwide Exclusive Publishing and Artist Development Contract. Brantley, an accomplished songwriter and a talented musician, has won numerous awards, both as frontman with his band, and as a solo artist, including Georgia Artist of the Year, Georgia Country Band of the Year and Traditional Artist of the Year. In 2012, Brantley was the State Winner of the Texaco Country Showdown. He has opened shows for notable stars Luke Bryan, Miranda Lambert, Craig Morgan, Jamey Johnson and many others.

“I am thrilled to have Scott join the Studio Gold Music family. Scott is so loved and well-supported in his home state of Georgia. Personally, I'm a real fan of his, for his songwriting skills, his vocal abilities and his true country sound”, said Mike Mouret, President of Studio Gold Music.

Brantley will be writing music in his role as staff songwriter for Studio Gold, and will also be working on creating new music as a recording artist for a future project. He joins a songwriting roster at Studio Gold that includes Derrick Hampton, Maryland Francis, Paul Cunningham and writer/recording artist Ryan Laird.
Follow Scott Brantley on Facebook at https://www.facebook.com/ScottBrantleyMusic